Shall I let you in on a secret? I’m not really a goal-focused person. I still haven’t finished the main quest in Skyrim. I like games where aimless wandering isn’t just allowed – it’s encouraged. Where you can spend hours doing something you’ve decided to do out of interest, and discover all sorts of wonders whilst doing so. Starbound is that game. You’ve probably seen it described as Terraria IN SPACE. That’s the only time during this preview I’m going to use that phrase. Because, well, it is – but it’s also so much more than that.

You start by choosing a race from the six (of a possible seven) available, customising your look and choosing a name either by yourself, or using the in-game generator. I was surprised by how many options there were, given this is phase one of three in the beta, and eventually settled on what I thought would be a lovely, elf-like race known as the Floran. I was wrong, but in the best way. These plant-people are not at all peaceful environmentalists but are, instead, carnivores intent on wiping out all other life! Mine’s called Stabrazer. It’s great. This is just one of many cases where Starbound takes you in a familiar direction, only to turn it on its head. Given that there’s a main quest line to come later, I have high hopes for the storytelling based on the character introductions alone. 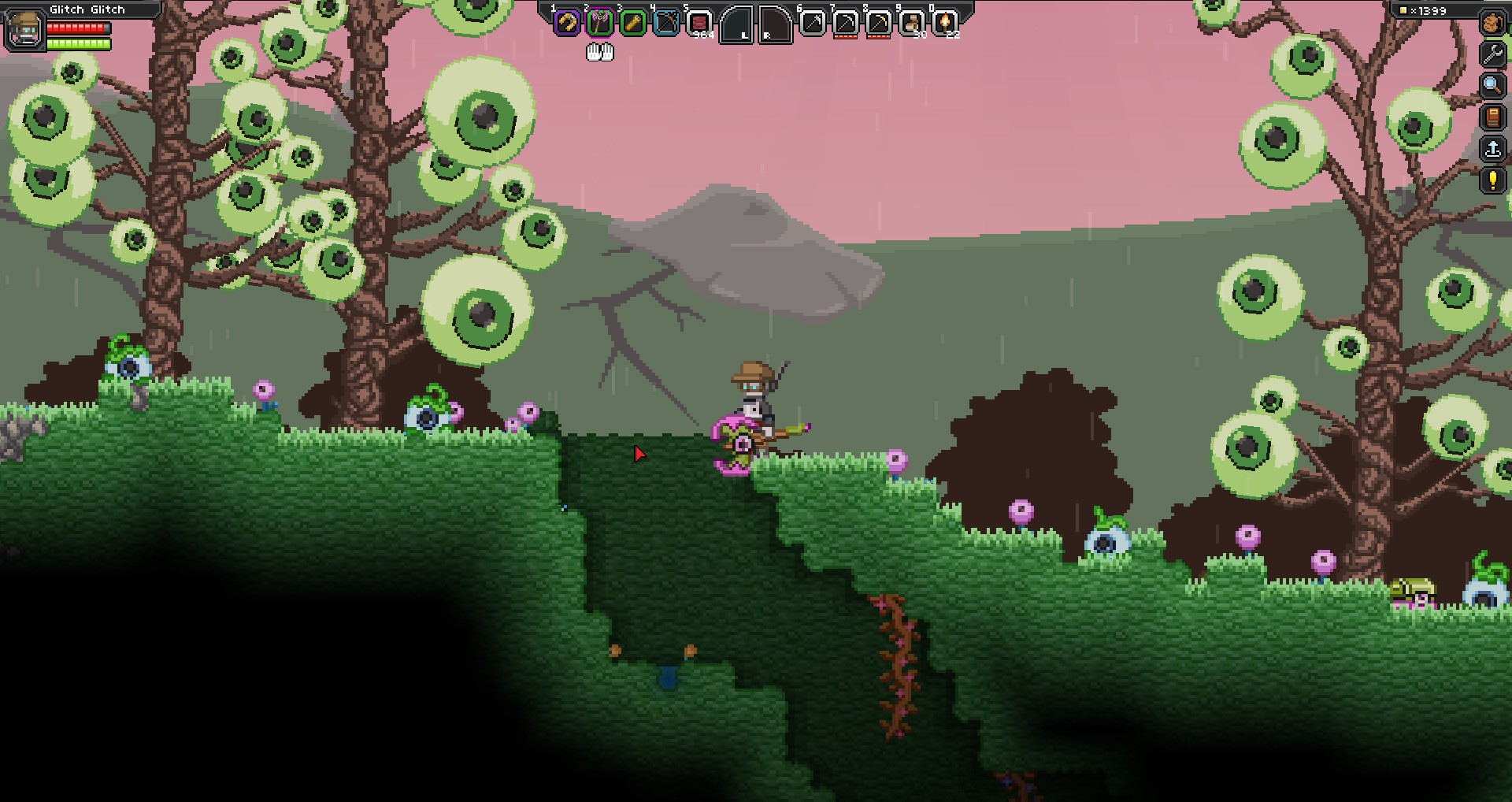 One of the most fun things I’ve discovered about the writing is the little magnifying glass tool – if you click on things such as rock, it will be very factual and tell you what it looks like. But if you click on something more interesting – like, perhaps, a chemical vial – what you get varies by race, and gives you that bit more character. It turns out that Stabrazer is scared of fire and wants to drink tasty looking chemicals. Whereas my Glitch, lovingly named Glitch Glitch (thank you, in-game name generator!), is fascinated by technology and incredibly pragmatic about most objects.

Having teleported down to the first planet in the hopes of finding fuel for my spaceship and wood for a crafting table (both tasks given to me in quest-form as a useful starting point), I found myself pretty much instantly killed the moment I met an alien. It looked like Pikachu, I thought it was cute and then it straight-up murdered me. Luckily, the penalty isn’t too harsh – just some loss of pixels (the in-game currency), unless you’ve opted for a harder mode. Back down I went, and this time had slightly more success. Then I got distracted and decided to build a lovely home with a death-dungeon and underground gardens. 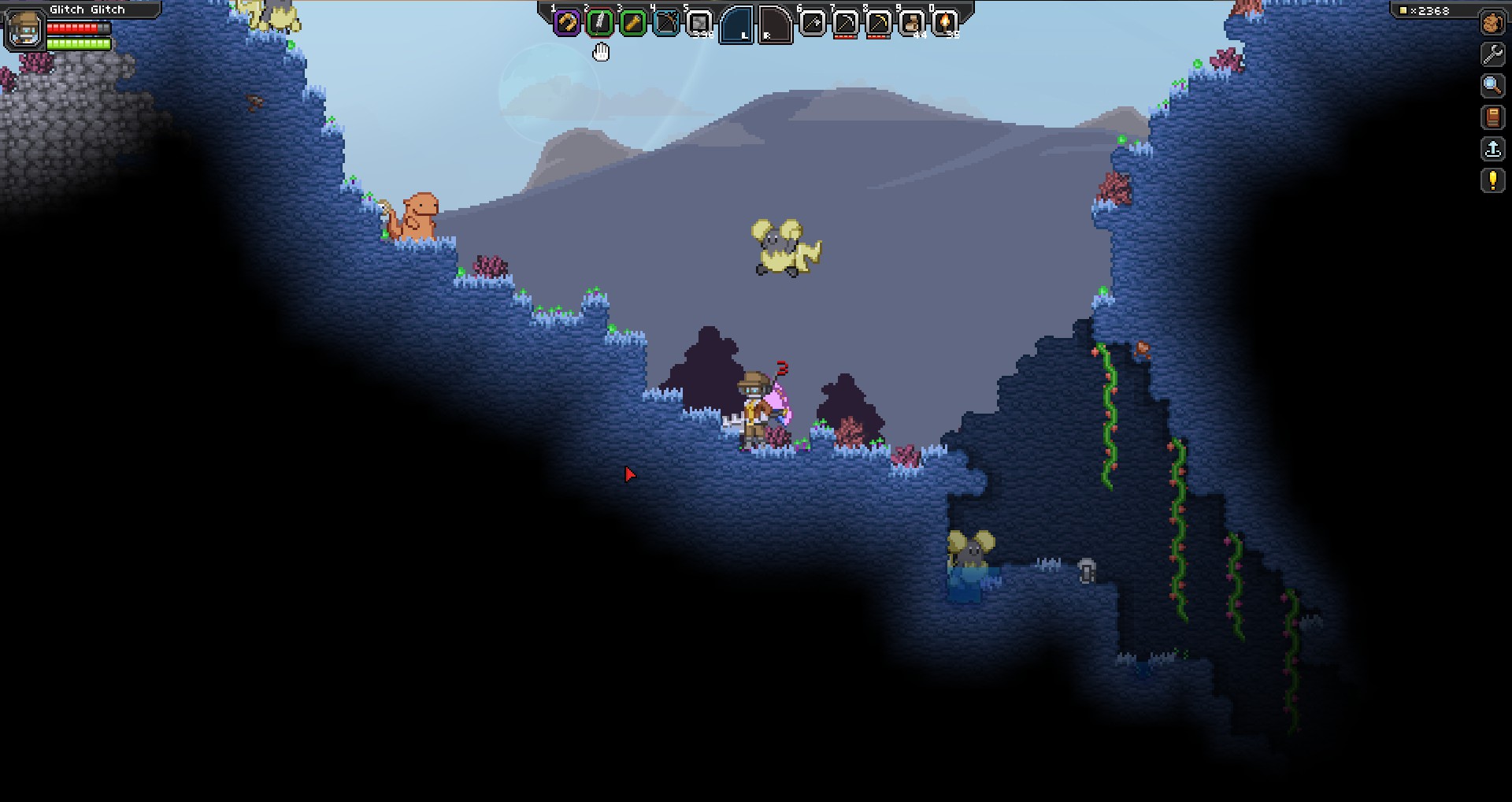 That’s the beauty of this game – after you’ve followed the basic introductory quests (and, if you’re anything like me, mistakenly built a distress beacon to call down the first level UFO boss way too early), you’re free to do what you want. For me, that’s wandering around searching for pretty-looking craft materials and jetting off to distant planets to find varied seeds for my shiny new greenhouse. For you, it might be digging down to the core for the strongest ore to make the best armor to advance to the next stage. Whatever you do, you’ll find the soundtrack makes it feel like you’re constantly on an adventure, with gorgeous, sweeping music that also adds a sense of loneliness to your actions.

Originally, I did find that the planets all began to get a bit samey – there’s only so many types of tree, after all, but recent updates have added more encounters, strange dungeons and weather conditions. I may have frozen to death on a once habitable moon without realising because the atmosphere had changed. Oops. But still, this is just one example of how the developers are great at patching in content to suit what people have been talking about, and they’re actively encouraging a thriving mod community. 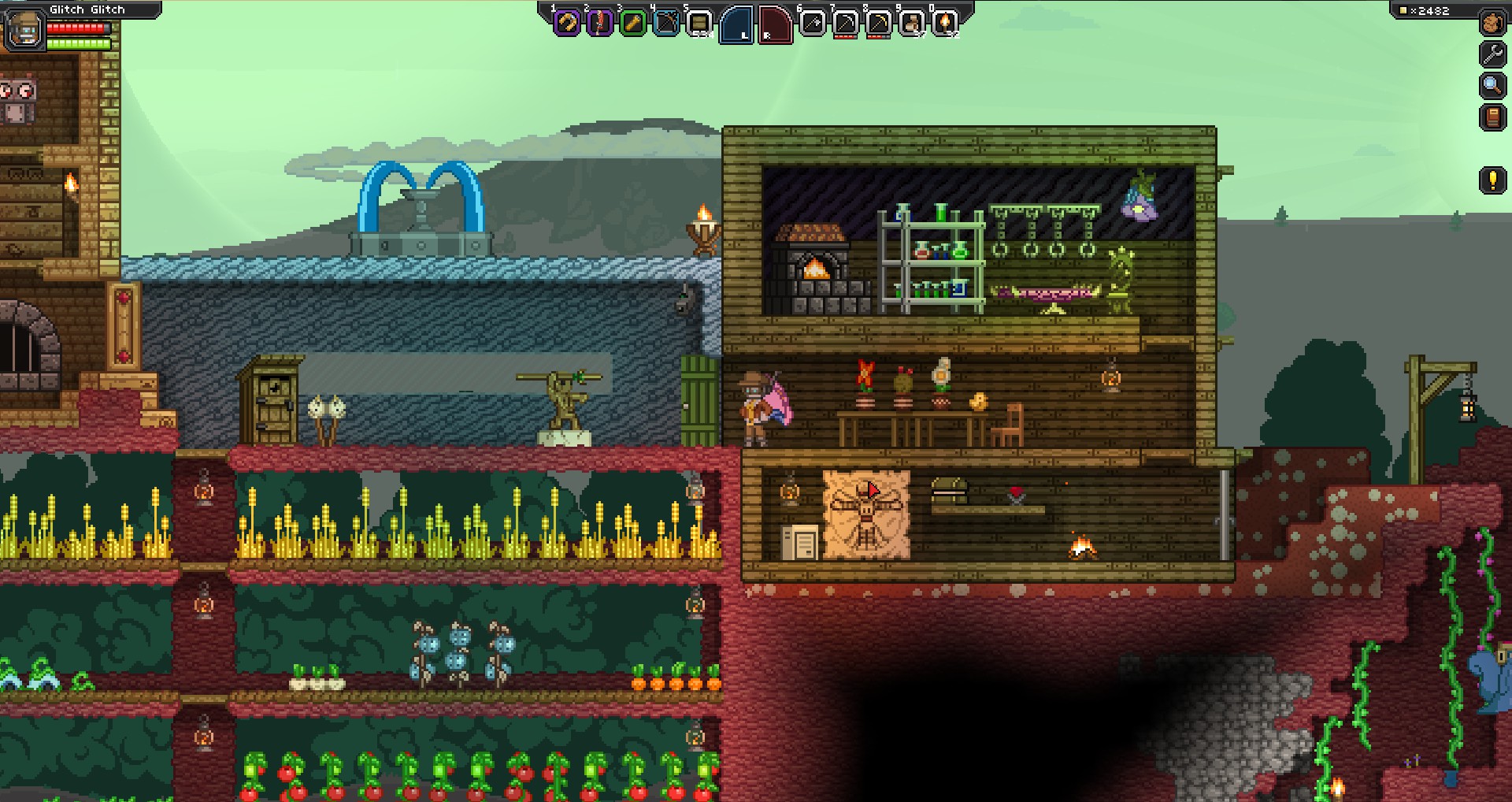 If there’s one problem, it’s the lack of information on what things do. I’m unsure as to whether this is because it’s in beta, or a style choice (Terraria once being guilty of the same thing) but it leads to some simple tricks being missed. For example, I didn’t realise I could repair my degraded pickaxe using ore, until I spotted someone mention it on a forum.

Starbound is definitely one to watch. If you enjoy exploring, and don’t mind character wipes, bugs and spoilers, stage one of beta is the already a great game. But if you’d rather wait for more concrete quest lines, and less problems, keep an eye out for it as it goes into the later stages, as it definitely won’t disappoint.

For now though, I’ll leave you with a fantastic example of one of the many ways you could choose to play Starbound: