Tripwire’s Killing Floor holds a lot of good memories for me. It and Day of Defeat: Source dominated the early days of my PC Gaming, and through it I found a lot of friends who I still talk to six years later. When I found out that we’re finally getting a Killing Floor 2, I was both excited and nervous about what was to come. As soon as I had the chance to get to grips with the current beta of the game, I came away wondering what it was I was ever worried about.

If you’ve not played it, Killing Floor is a wave-based survival co-op FPS. Each round sees you and your team face off against increasingly powerful mutant clones known as Zeds. Some of them vomit on you, some scream at you, some of them have chainsaws for arms, and some of them are giant roid-raging behemoths who’ll destroy your entire time easily. After wiping out a wave, you’re given a limited amount of time to spend your earnings on new guns, grenades and armour in the hopes you’ll survive the next round.

It sounds like pretty standard fare: ‘oh yay it’s just Nazi Zombies mode…’ but the real joy that sets Killing Floor apart comes in to the teamwork required to survive. Each player can pick a class which allows them to do better in certain situations, and so survival is easier when the team evenly spreads their strengths rather than all bunching up as one class. Sharing your winnings and weapons, healing each other, and welding doors to funnel enemies down choke points all require a sort of teamwork that’s qualitatively different from something like Left 4 Dead.

You’ll notice I’m describing Killing Floor and not Killing Floor 2, and that’s because the sequel is almost identical to the first game (and the mod they’re both based off of.) In regards to the play, there is very little different to the core mechanics: shoot, survive, work together. It’s the little differences and tweaks between the two games which really emphasise how much of an improvement Killing Floor 2 really is over the original.

For starters, it looks freaking gorgeous. Killing Floor was never renowned for its visuals; it ran off of an engine that was old even at the time of release, and had a problem with being mostly browns and greys. In Killing Floor 2, each level is colourful with blues, yellows and reds; the lighting is revamped and having multiple players in a dark room can really be an impressive sight to behold.

Most importantly though is the changes to the gore. Killing Floor has always taken an almost perverse satisfaction in slowly showing enemies explode and their bodies cover the surrounding area. With the new engine update, this gore is now present for the entirety of the game. It never goes away, it never magically cleans itself up.  Surviving a wave in a tight corridor and taking a minute to notice every single fucking wall is now covered in blood, and the corpses of up to 100 Zeds are now strewn in bits of pieces around all over the place really is a sight to behold. Killing Floor 2 is an absolute bloodbath.

There’s been a stylistic update to the “Zed time”, a mode that activates slow-motion to show particularly gory killings while also allowing you to aim up other shots more easily. It now also tints the screen in a good looking black, white, red and yellow to really emphasise the carnage. For a game featuring enemies vomiting on you, Killing Floor 2 sure is purdy.

Killing Floor had a problem of only a few maps being particularly interesting; many were very, very open and surviving in them was fairly easy. Killing Floor 2 currently doesn’t have that problem. There are currently three fantastically designed maps available in the game (and more will be added during early access), but all three of those maps are large and complex. They have multiple paths and multiple areas to have tense last-stands in, and lots of hidden areas that you won’t realise exist until Zeds start creeping from them.

Another massive improvement over the first game is that Killing Floor 2 embraces the backstory that was so often left as an afterthought in the first game. The Zeds have spread from the UK to France, but the game still features familiar faces such as Mr. Foster, the man in the gasmask.

What’s different this time is that characters will often talk to each other about what is happening or any needs their teammates have. For example if someone is low on health or ammo, two players’ characters may have a discussion about it to hint to other players they need healing or an ammo pack. Not only does this help allow for better teamwork between otherwise uncommunicative players, it adds more depth to the world: these characters are aware of what “Fleshpounds” or “Scrakes” are, and that helps educate the player as to the world of Killing Floor in a way the first game simply didn’t.

It’s early days and there is no overarching narrative, but nothing had much character in Killing Floor beyond cheesily written and acted lines (“two bloody great handfuls!”) and this little bit of dialogue adds so much to the feel of Killing Floor 2.

Each Zed also has newly improved AI, and can behave in dramatically different ways. Different difficulty settings will change how enemies react to you, as well as which routes they take. For example, Scrakes (big burly dudes with chainsaw arms) acted in much the same way as the smaller, weaker Gorefasts in Killing Floor. In Killing Floor 2, they are a massive threat to the team with area-of-effect swinging attacks and charging the player. These sorts of tweaks made to the enemies makes each one feel like their own viable threat, rather than part of a heaving mass as they did in Killing Floor.

It’s important to note some of the pitfalls the game has, but they are almost universally down to the fact the game is currently in early access, and just needs some more development time before being good.

There’s a dearth of unique weapons available for each class, and many of the available guns feel very similar to each other. This makes choosing guns a decision based on stats more than feel, which is unfortunate because I remember Killing Floor having fantastic gunplay. Each weapon felt different and viable – hand-cannons, pistols and SMGs all radically changed the strategy of the player and their reliance on secondary weapons, but all were just as good at dispatching enemies as the others. In Killing Floor 2, weapons of the same type feel almost identical to each other, and what weapons you can access are limited by your chosen class. The gunplay still feels fantastic, but not as varied or open to experimentation as the first game was.

There’s also currently only three maps, and a lack of a solo play mode which can be frustrating, however these are definitely going to be added in the future during the course of early access. 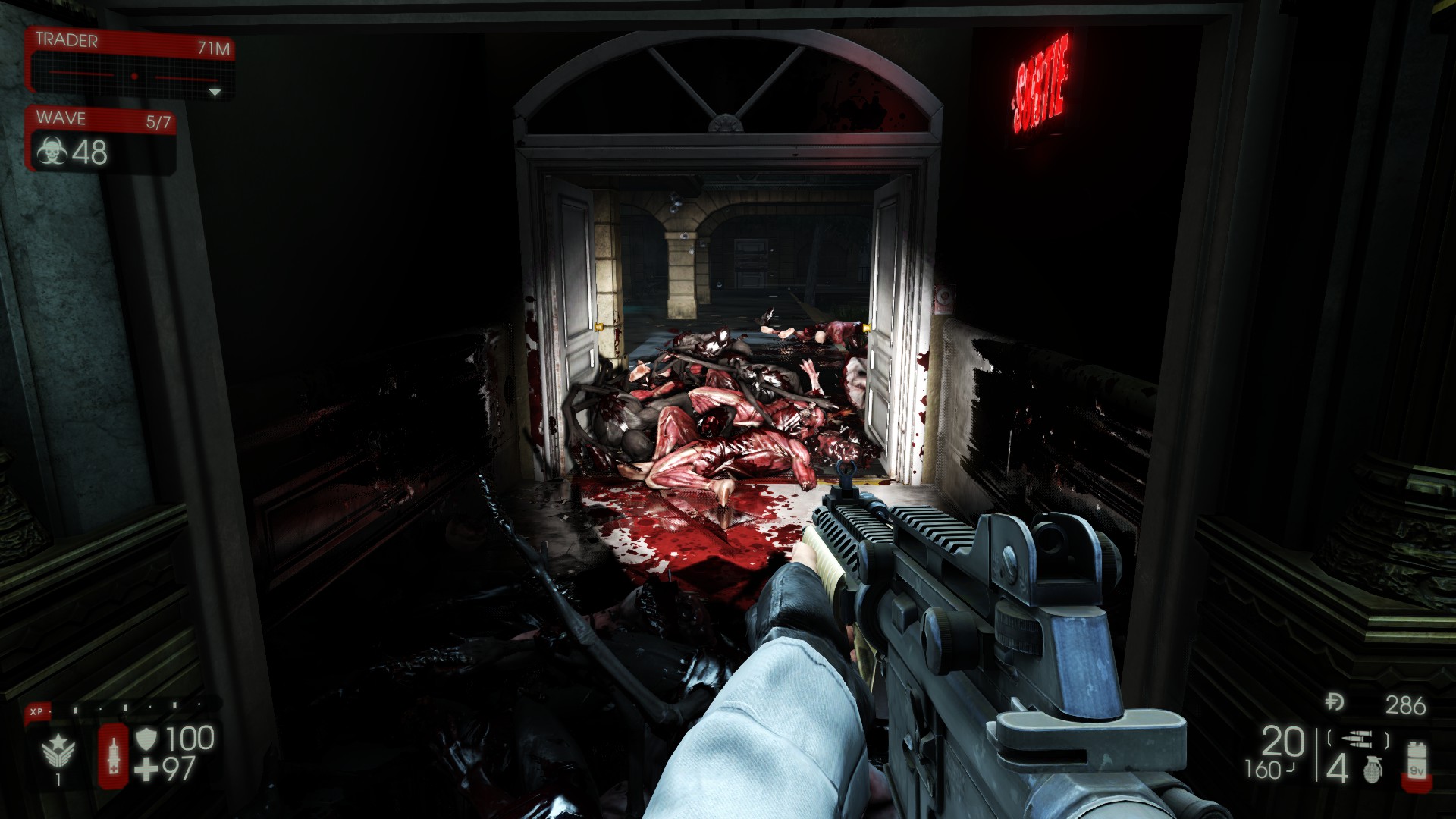 Whether or not you’d enjoy Killing Floor 2 totally depends on your enjoyment of Killing Floor. If you played the first game but didn’t like it, Killing Floor 2 doesn’t bring anything new that will convince you. But if you did like Killing Floor, Killing Floor 2 improves on the game in almost every way: fresher visuals, better voice acting, more varied map design, and enough gore to make Jigsaw himself cringe.

If you’ve never played a Killing Floor game, Killing Floor 2 is where you’ll want to start now. Going back to the first game will be incredibly difficult. Killing Floor introduced the concept, Killing Floor 2 massively improves on it. I’m really excited to see how the game develops over the course of its early access when it launches on April 21, but right now the game is already polished, fun and really impressive. I’ve got complete faith in Tripwire with this, and it should be totally worth the $30 asking price.